History of the Killarney United Church   Part I. 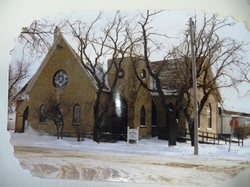 This millennial year coincides with the 100th anniversary of one of Killarney's oldest institutions. On June 18th, the Killarney United Church will celebrate a century of growth, highlighted by many successful transitions and renewals. Situated on the southeast corner of Finlay and Williams, the Church was constructed in 1900 to serve the local Methodist congregation. It has a colourful history that began in the final decades of the 19th century.

The Methodists held their first services in Killarney in 1883 under the direction of Rev. Andrew Stewart It was Rev. Stewart who established many of the early Methodist churches in the Turtle Mountain district. Born in 1910, Mabel (McCalpin) Britton is the Church's longest living member. Notations in her family Bible from 1885 make reference to the McCalpin's membership in the local Methodist Church.

In 1887, the Methodist congregation built their first Church and a small parsonage where Killarney United now stands. Rev. John Tozeland was a Minister of the original Methodist Church. Years later, he purchased retirement properly on the lakeshore that became known as Tozeland's Point. He and his wife are buried in the Killarney Cemetery.

In the late 1890's, Rev. ™C.F. Van Norman replaced Tozeland and plans began for the building of a new church. The old church building and parsonage were moved off the property and construction began on what is known today as the Killarney United. A memorial window was dedicated in honour of Van Norman's service. The corner stone at Finlay and Williams was laid in the spring of 1900. Before the Church was completed in the fall of that year, Van Norman fell ill and was replaced by Rev. Sam Wilkinson.

Meanwhile, it was 1884 when the first Presbyterian missionaries were sent to serve the area of Cartwright, Killarney and Highview. In 1898, the Presbyterian Mission of Killarney built its Grskine Church at 318 William Ave. During its first decade, the Methodist Church welcomed a significant number of dispossessed Grskine Presbyterian Church members. The needs of the increasing Church population led to the addition of a schoolroom. Eventually, the Presbyterians were accepted back into their own church, leaving the Methodist congregation to carry the debt for the new schoolroom. 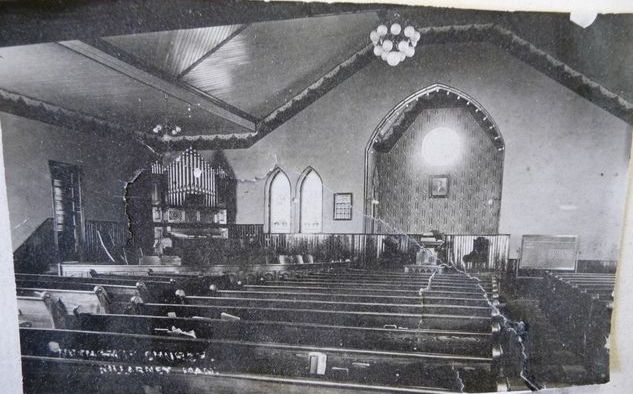 In the early 1920's, the Methodists purchased a parsonage south of Tupper on Main (Broadway Ave.). It continued to serve as home to church ministers until 1941. In 1922, discussions began between the national governing bodies of the Method- ist and Presbyterian Churches. Ultimately, those negotiations lead to Union and the United Church of Canada was born on June 10, 1925. Immediately following Union, the Killarney Methodist Church became the Killarney First United.

Local churches often amalgamated their congregations when there was a shortage of Ministers. Such was the case in 1913 when Rowland Church was built by local Anglicans, Presbyterians, Methodist and Mennonites. That history of cooperation prepared many for the concept of formal Union.

The idea of was first introduced locally in 1913 when a group of Methodists circulated a petition advocating union. When the issue came to a vote, the Presbyterian vote was 84-40, the Methodists voted 102-2 and the Lena congregation was 100% behind Union. A second vote showed an increase in support for union although a quarter of the Presbyterian congregation abstained. 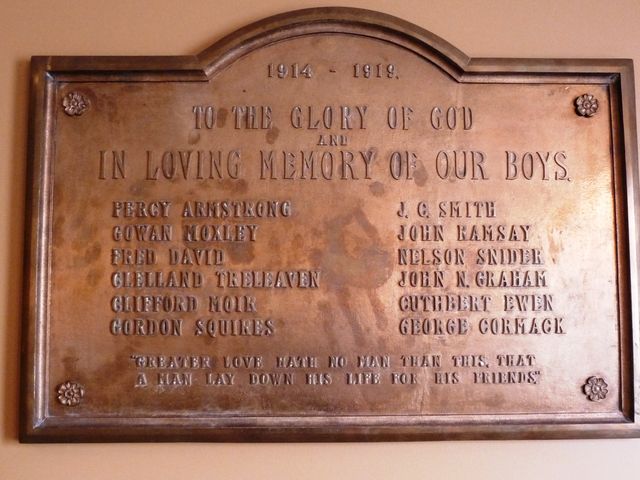 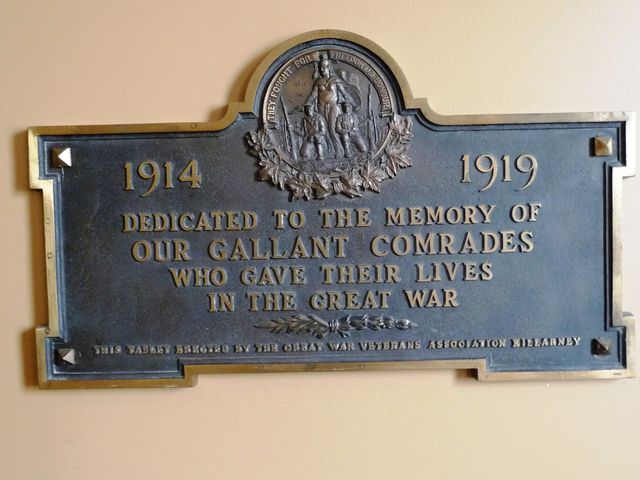 Although many Presbyterians, both locally and nationally, were slow to acknowledge the formal Union of 1925, the Erskine Presbyterian Church, nevertheless, became the Erskine United. Rev. Andrew Little was Minister of the Erskine Church at that time. He and other strong leaders within the local congregation are credited for their efforts toward an amicable transition.  Still, a significant number of Presbyterians rejected Union and continued to worship in their chosen faith.

In Killarney, such dissenters worshipped separately in the Free Methodist Church until they built the Presbyterian Mission Church in 1950. The Lena United Church, dedicated on Dec. 7, 1925, was one of the first built after Union. In the first year after Union, Killarney First United celebrated the burning of its $1500 mortgage and paid off a $500debt on the parsonage.

In 1941 finding itself in need of a new Minister, the Board of First United instead called a meeting with Erskine United and representatives from Lena and Hullett to discuss the possibility of uniting their congregations. Since the Erskine Church was in financial difficulties and in need of a new church building, its response to union was favorable. An Inaugural Service was held on Sunday, July 6, 1941. 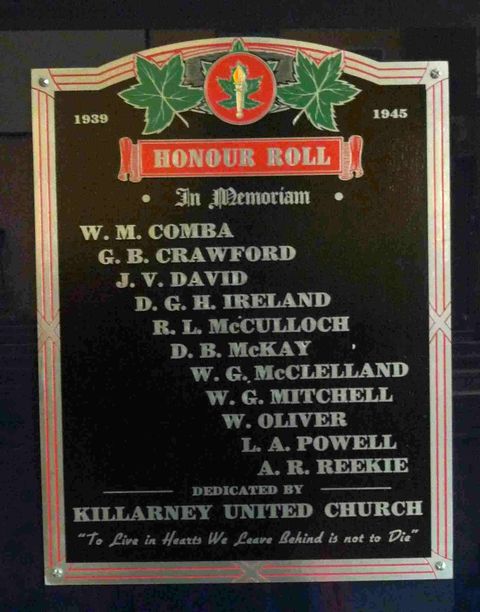 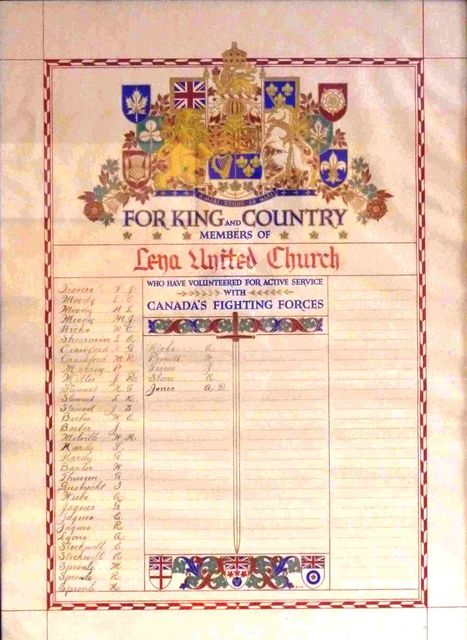 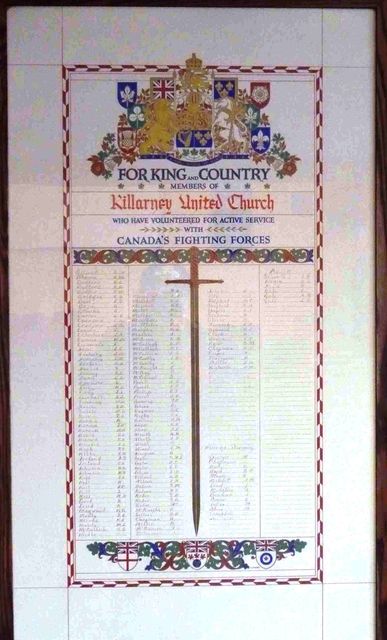 Killarney United's parsonage on Main Street was sold and the Erskine Manse was retained as the Minister's residence. The Erskine Church, itself, was finally razed in 1960 to make way for the new Samaritan Hall. The former hall has been the home of Lakeland Regional Library since January 1974.

In 1951, a new manse was built at 232 Williams Ave., replacing the original Erskine Manse. Rev. J. Alex Stephen arrived from Pilot Mound with his family and they became its first residents in January 1952. This, the last of the Church-owned residences, was sold in 1990. Lena Church closed its doors in May 5,1968 and its membership merged with the Killarney United. In 1964, when the Ninga United Church closed, Rowland Church became part of the Killarney charge. In 1975, Rowland Church also closed and its congregation joined Killarney United. 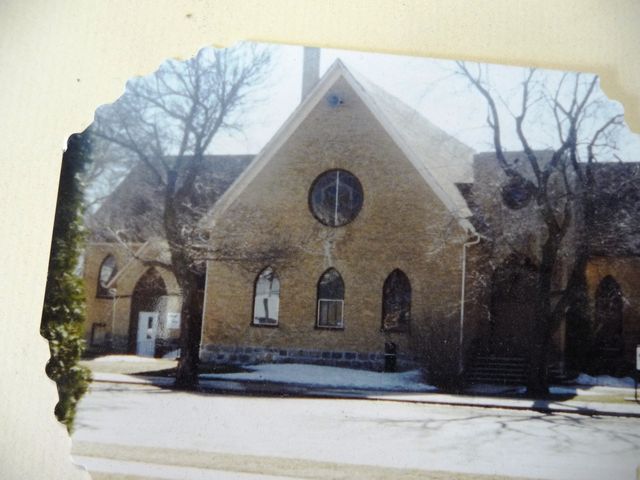 The Christian Education Centre was conceived in 1964 under the ministry of Rev. John Wood. A building fund was soon established and the property to the south of the Church was purchased. Construction began in 1967, during Rev. Riddell's term. In the past three decades, the C.E. Centre has served the Church and the community as a multi-purpose facility. In addition to its regular use for Sunday school and classrooms, its stage and kitchen accommodate dinners and entertainment activities. The Centre is often rented for community meetings and gatherings.

Killarney United's history involves much more than its physical structure. It is the people and their organizations that bring its history to life. Church women have a well-recognized tradition of hosting dinners, teas, and bazaars and taking responsibility for various Church housekeeping duties. 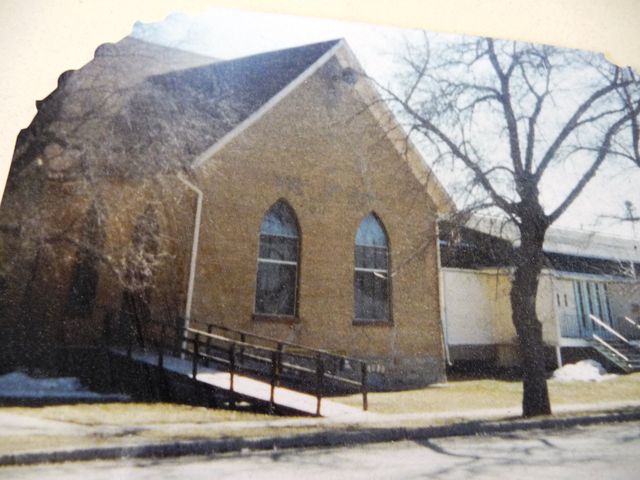 Perhaps less well-known is the degree to which their activities have financially supported the Church. In fact, the formal organization of Church women had its beginnings in serving the financial needs of the Church. The first reference to the work of the Methodist Ladies’ Aid indicates that the group was established in about 1890 to help pay off the debt of their newly-built church.

That tradition of financial contribution has quietly continued throughout the years. In the 1960's, for example, the United Church Women contributed considerably to the Christian Education Building Fund, completing the kitchen and meeting room, furnishing the Minister’s study, laying carpet in the foyer and stairs and installing a P.A. system in the auditorium.

The U.C.W. has its origins in the Methodist and Presbyterian Ladies' Groups which joined forces on April 5, 1926 to become the Women' s Association (W.A). Mrs. A.M. High, having already served 14 years as President of the Presbyterian Ladies, became President of the W.A. in 1929 and remained in that position until 1960. She was also the church organist and Sunday school teacher for many years.   In addition to their commitment to the local congregation, Church women have a long-supported national and international charitable cause. To that end, the local Presbyterian Ladies formed a Women's Foreign Mission Society group in February 1905. In 1928, Mrs. Cooke, wife of the Minister, Dr. Cooke, requested that the Women's Missionary Society be given a seat on the Church Board. Although the W.M.S. received permission to appoint a member to the Board, there is no record of such an appointment. 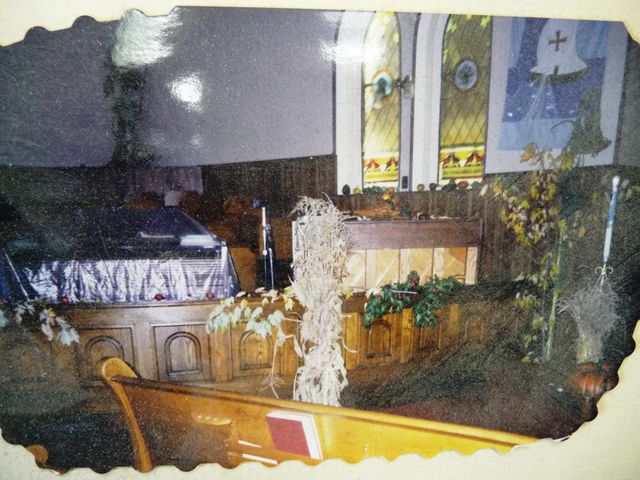 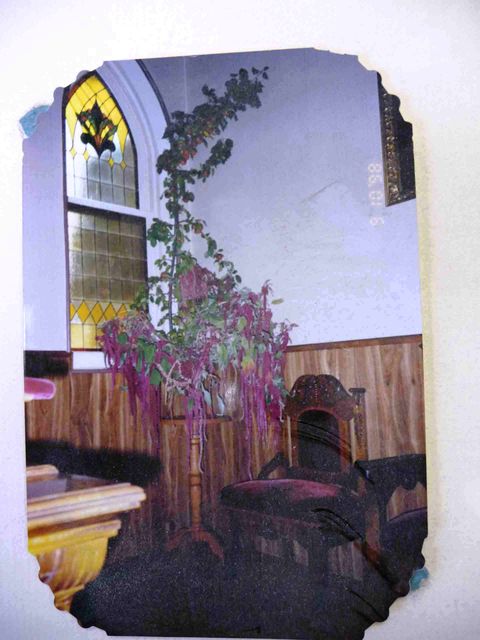 In fact, despite their significant contributions, women's names rarely appeared in the official Church documents and the women, themselves, kept few formal records of their activities. Their first formal recognition came in 1943 when Olive Atkin became a member of the Board of Stewards. She served as Church Treasurer and remained on the Board for 12 years. In 1968, Ruth Dow and Olive Fairhall were elected as the first women members of the Session.   In 1962, the Women's Missionary Society and the Women's Association became officially known as the United Church Women. Mrs. Eva Sanders became the first President of the new organization. The U.C.W. continued the tradition of supporting charitable efforts including sponsorship of a series of foster children through the Foster Parent's Plan.

The group provided financial assistance to the Omegas for the establishment of a Thrift Shop and in the early 70's, took over its operation. The Thrift Shop continues to be an excellent community resource and a source of income for other U.C.W. initiatives.

Over the years, the Church has spawned a number of organizations and activities in support of its membership, particularly young people. The first Young People's Summer School held in Manitoba was conducted in Killarney around the turn of the century under the ministry of Rev. C.F. Van Norman. Other such groups have included the C.G.I.T., Omegas, Hi-C, Young Adults, Mission Band and Messengers, to name a few.

In 1962, the United Church was joined by the local Anglican and Killarney Mennonite Churches in the sponsorship of a refugee family from Palestine. A rented house was cleaned, dressed and furnished, only to be sold by the owner before the refugee family arrived. A second house was secured and the family arrived in Feb. 1964. They found the transition to their new country difficult and remained in Killarney for only 9 months.

A second sponsorship brought the Dong family from Vietnam to Killarney in June 1980. Phong, Quyen and their family remained in the community for several years before moving to Winnipeg. They have made regular return visits to Killarney since that time.

The Church has benefitted from the service of a long succession of Ministers and their dedicated spouses. Most served for five years or less; the longest serving, Rev. Allister Riddell, wanted to raise his children in Killarney. He served from 1967 to 1981, transferring only after their last child had graduated.

The otherwise-famous, Rev. Stanley Knowles, ministered in Killarney for a brief period in the fall of 1936. Rev. Spence served during the tumultuous period of Union, from 1922 to 1927. He returned to Killarney in the mid - 50's as an interim Minister. For six months, at the age of 88, Rev. Spence travelled back and forth from Winnipeg to conduct weekend services. 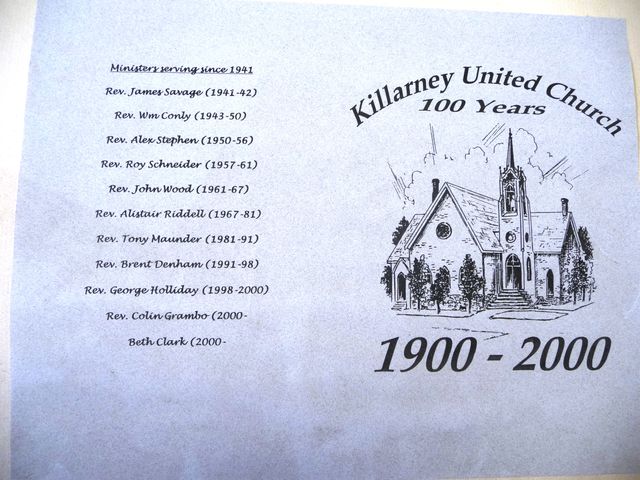 In honor of the 100th anniversary, a morning worship will include guest preacher, and former local minister. Rev. Tony Maunder. The afternoon's entertainment will feature the congregation's former organist, Harold Kuipers.